On June 23, 1865, General Stand Watie, a member of the Cherokee Nation and Brigadier general of the First Indian Brigade of the Army of the Trans-Mississippi, surrendered to Union forces at Doaksville in the Choctaw Nation. With his signature upon the cease-fire treaty, Watie became the last Confederate general in the field to surrender during the American Civil War. 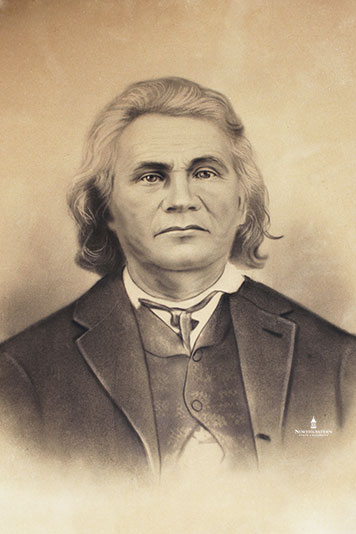 THE LAST TREATY OF THE AMERICAN CIVIL WAR

The University Archives team at Northeastern State University knew it had discovered a unique piece of history November 2014, when a relic document from 1865 was found in a storage box labeled Indian Correspondence.

I almost cried. I got tears in my eyes, recalled Brenda Bradford, interim archivist at the John Vaughan Library in Tahlequah.

Bradford reacted this way because archives assistant Blain McLain, discovered an original copy of the final treaty from the American Civil War, signed in what was then Indian Territory, by the very last confederate general.

When I flipped it over and saw June 23, 1865 and Stand Watie. I read it up and I called Brenda over, and we knew we had something, McLain said.

The three-page, handwritten document reveals a well-known supporter of the Confederacy Brig Gen Stand Watie of the Cherokee Nation surrendered his brigade and agreed to end all hostility toward the United States on that date.

This is the last, formal surrender of a general in the civil war which is probably by all accounts, the most influential war in American history. It shaped the country's future more than any other war has, McLain said.

Even though history recorded the official end of the war on April 9, 1865 when General Robert Lee surrendered to General Ulysses Grant in Appomattox, Va., it was more so the end of fearing for the Union's demise, said McLain. It wasn't the end of the struggle. Several months later in June, Watie was the final general to capitulate to the Union.

According to Dr. Brad Agnew, a history professor at NSU, the civil war officially ended for the Cherokee Nation when Watie signed the treaty and his unit of Confederate Cherokee, Osage, Creek and Seminole Indians disbanded.

An off-white, silk ribbon ties the three aging pages together. The words written in cursive 150 years ago, somehow remained legible, an incredible feat considering it has not been preserved in a special folder for many years.

Watie signed the surrender treaty in Doaksville in the Choctaw Nation, near the Texas border, alongside two commissioners for the Union- Lt. Col. Asa C. Matthews and William H. Vance. There are only two other copies known to be in existence.

We don't know for sure how many copies they wrote, Bradford said, explaining there was no way to make copies short of re-writing it themselves.

The Gilcrease Museum in Tulsa has another version of the treaty, considered to be a two-page draft of the final version, and the National Archives and Records Administration (NARA) has a copy.

Agnew traced the university document back to Dr. T. L. Ballenger, a history professor at the Northeastern State Normal School in 1914, about 70 years before it evolved into NSU.

He said an article published in the 1978 spring issue of the Chronicles of Oklahoma described all the significant holdings in NSU's Special Collections Department, but did not mention the treaty. This suggests that its existence was unknown then.

Agnew said the recent discovery of Watie's treaty in the University Archives was a tribute to Ballenger's determination to preserve and document the history of the Cherokee Nation and northeastern Oklahoma.

Ballenger became interested in regional history in the 1920s and spent his time and energy researching and writing about it. He amassed an impressive collection of documents, which are divided between Northeastern and the Newberry Library in Chicago.

It's a very rich and rare piece of historical material. And it's good timing, McLain remarked.

As for the significance of NSU possessing the document, McLain said, Because the Cherokee Nation is in Tahlequah, Oklahoma, it's a large part of their heritage. That's very specific history and to have one that locally accessible is kind of a big deal.

While there are theories about how Ballenger came to possess the document, Agnew said his gift has given NSU a tangible link to the conclusion of the most wrenching era in American history, and the closing of a chapter in Cherokee history, more devastating than the Trail of Tears.