From the “Blue Nightie Group” to chants of “man on the floor” to alert the female residents of when gentlemen were in the building, Cooper shared some of those memories with guests gathered outside Wilson Hall on Tuesday for its rededication and celebration of completed renovations.

More than 80 years ago Wilson Hall etched its name in NSU history when the women’s dormitory officially opened its doors to students in the spring of 1937. 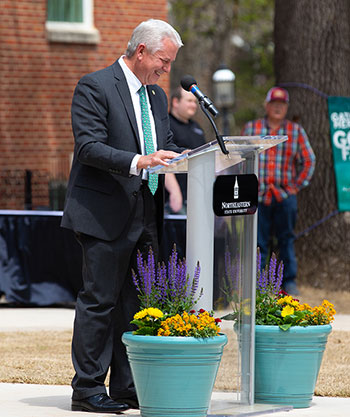 President Turner: NSU President Steve Turner smiles as he delivers remarks during a celebration on Tuesday of the completed renovation of Wilson Hall.
Since then, generations of NSU students’ lives were shaped within Wilson Hall including Cooper and other alumni who make up “The Nifty Fifties” group that remain active in supporting the university and projects such as the $20.3 million renovation of Wilson Hall, where many spent their college years.

“This is a project that has been moving forward for a little more than a decade,” NSU President Steve Turner said during a rededication ceremony of renovated Wilson Hall on Tuesday. “We are ecstatic that this building has a new look, a new mission and a bright future.”

Named for the legendary Florence Wilson, longtime principal of the Cherokee Female Seminary, the original Wilson dorm was built in the 1930s under President Franklin Delano Roosevelt’s Works Progress Administration to house 184 girls.

Over the years, the number of residents grew and in 1960 it was remodeled to have an addition on the northside of the original dorm’s east wing. After serving as a dormitory for many decades, Wilson Hall was temporarily closed in 2011 as NSU officials pondered the building’s future.

Campus and student needs evolved over time and Turner said some of the suggested uses for the building ranged from a historical center museum to a retirement village for former faculty. Ultimately, with strong support from current NSU students, alumni and the community, it was decided to convert the former dormitory into the new home for the College of Liberal Arts.

“We are very excited that Wilson Hall is going to be the flagship building for our college going into the future,” Dean of the College of Liberal Arts Dr. Mike Chanslor said. “We are honored also to be part of a building that has been so important to the history of Northeastern State University as we transition from its original purpose as a dormitory to a classroom building.”

With a basement, three floors and an attic space, the space was converted over several years to add classrooms, including two large ones in the attic, an event space, a lobby/art gallery, banquet area, conference rooms, labs, studios and offices for faculty and administration. Crews were also able to incorporate an additional 11,165 square feet of previously unused space to grow the building’s overall footprint to around 75,400 square feet. 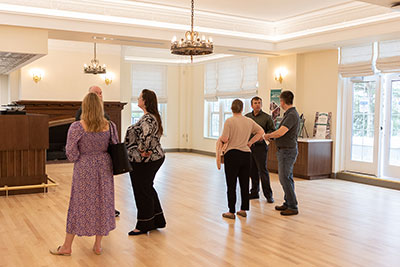 Wilson Hall Tour Inside: Following a short ceremony, guests were invitied to tour the newly renovated Wilson Hall on Tuesday. Pictured, attendees are gathered in a room on the first floor which features a cafe and fireplaces for students to gather around.
Crews also worked to retain some of the original hardwood and terrazzo flooring, wood fireplaces, chandeliers and other features as they made modern upgrades such as bringing the building up to code adding an air conditioning system and elevator.

As the new home of the College of Liberal Arts, several NSU programs such as American Indian Studies, Art Education, Cherokee Education, Communication Studies, English, Political Science, Spanish Education and more will take place at Wilson Hall. In addition, all undergraduate students enrolled in on-campus courses will take most of their liberal arts general education classes in Wilson Hall.

Regional University System of Oklahoma Board of Regents Chair Connie Reilly said she is excited for NSU, adding that the new space will help the College of Liberal Arts add an exclamation point to the institution’s reputation as the state’s premier, transformative learning institution.

Reilly recalled when NSU officials first approached the board of regents with the vision of repurposing Wilson Hall, adding that once she accepted an invitation to tour the facility it became clear that RUSO needed to support this project.

Turner said the regents came to the same determination as school officials and the community that the building deserved to be retrofitted to serve students in the 21st century. Funding for the project came from private donations, infrastructure fees, dedicated reserve funds and Section 13 funds provided by state statute.

“I would like to say how proud I am of everyone who had anything to do with giving this building new life and moving it on to its next chapter,” Reilly said.