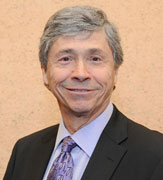 Constitution Day is the federal observance of the signing of the U.S. Constitution on Sept. 17, 1787. At noon on this year’s Constitution Day, Robert Miller (Eastern Shawnee), a tribal judge and law professor at the Sandra Day O'Connor College of Law at Arizona State University, will lead the virtual presentation “Indigenous Nations Constitutionalism and its Influence on the United States Constitution.”

The Department of Geography and Political Science, in partnership with the Center for Tribal Studies, is sponsoring Miller’s presentation.

NSU Department of Geography and Political Science Chair Dr. Daniel Savage said the political science department hosts a different program marking Constitution Day every year. This year’s focus on Indigenous people’s influence on the U.S. Constitution was inspired by one of Savage’s students.

He recalls while teaching about Indigenous nations’ influence on the Constitution as part of his American Political Thought course last spring an Indigenous student told him she had never heard about any of this before. Savage said she stated it made her proud and encouraged him to share such information more widely at events like the one planned for this upcoming Constitution Day.

“I think it is important because NSU is located in the capital of the Cherokee Nation and has a relatively high percentage of Indigenous students,” Savage said. “They need to know that their ancestors influenced many of the founders and that some of their nations had democratic political systems and recognized individual rights before Europeans came to America.”

Among the various articles Savage referenced as part of the course section one was authored by Miller whose areas of expertise are federal Indian law, American Indians and international law, American Indian economic development, Native American natural resources and civil procedure.

Miller is also the Willard H. Pedrick Distinguished Research Scholar at ASU, the interim Chief Justice of the Pascua Yaqui Tribe Court of Appeals and the Faculty Director of the Rosette LLP American Indian Economic Development Program at ASU. He has also worked as a consultant with the American Philosophical Society since 2006 on tribal language and archival issues.

Those interested in attending Miller’s presentation on Sept. 17 can do so via Zoom using the meeting ID: 9300 792 1902. It will also be livestreamed on Facebook at www.facebook.com/ NSURiverHawks/.

“The idea that the founding fathers could have lived with and near Native Americans all their lives and not be influenced by them is absurd. The Natives and the Colonists influenced each other,” Savage said. “I hope at the conclusion of the webinar people who attend will have a deeper understanding of how Indigenous people influenced American political institutions and American political culture.”