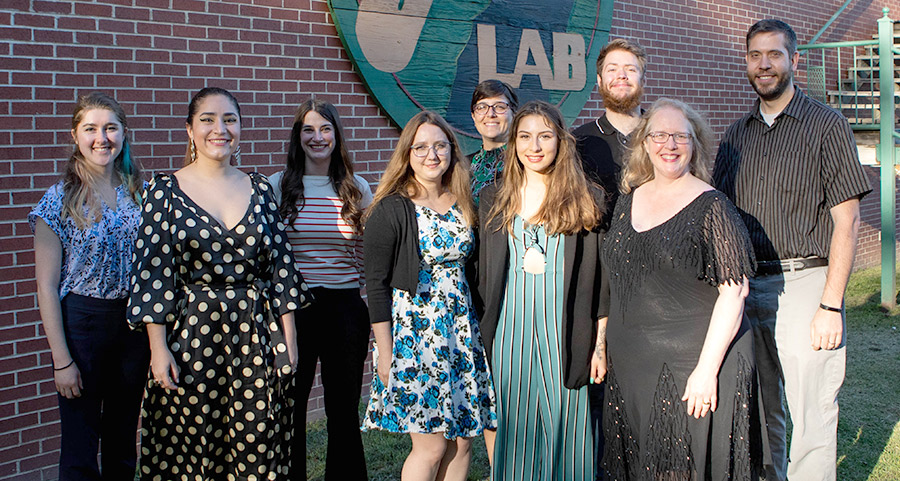 The student initiates were Rachel Archer and Aspen Ford of Tahlequah, Jessica Farquhar of Sallisaw, and Joshua Fenn of Gans.

Dr. Beth Green-Nagle, assistant professor of Spanish at NSU, was inspired by students to reactivate the Tau Epsilon chapter on campus.

The chapter has been inactive for at least 10 years and Green-Nagle was excited to extend the opportunity to students once again.

“I was motivated to reactivate the chapter because we have had an extraordinary cohort of students in the past few years, and I wanted to honor their hard work, scholarship and achievements,” said Green-Nagle.

Fenn, one of the students who suggested the chapter be reactivated, mentioned that NSU will now be connected to Sigma Delta Pi chapters across the country, allowing even more networking with Spanish students.

“I like organizations like this, or even like Spanish club, because it gives us an opportunity to come together outside of an academic circle,” Fenn said about joining Sigma Delta Pi. “We can have fun as well as be together in a professional manner.”

For some student initiates, college was the first time they began studying a foreign language. Now the Tau Epsilon chapter of Sigma Delta Pi is once again one of the many opportunities NSU students have to foster their interest in learning about languages and cultures.

“I'm really proud because I learned Spanish through college. I didn't speak it in high school. I had the amazing opportunity to study abroad and immerse myself in the language, and really build up my skills. And so, to just come this far to be a part of a society that is Spanish-speaking is really amazing, and it makes me feel very proud and happy,” Ford said.

NSU students who met certain criteria, including having completed three years of college-level Spanish coursework and in the top 35% of their class, were nominated to be initiated into the Tau Epsilon chapter of Sigma Delta Pi.

Another initiation will be held in the fall 2021 semester to induct additional members. Green-Nagle also said the chapter plans to host one event each semester that highlights the group’s love of the Spanish language as well as celebrating cultures of the Spanish-speaking world.