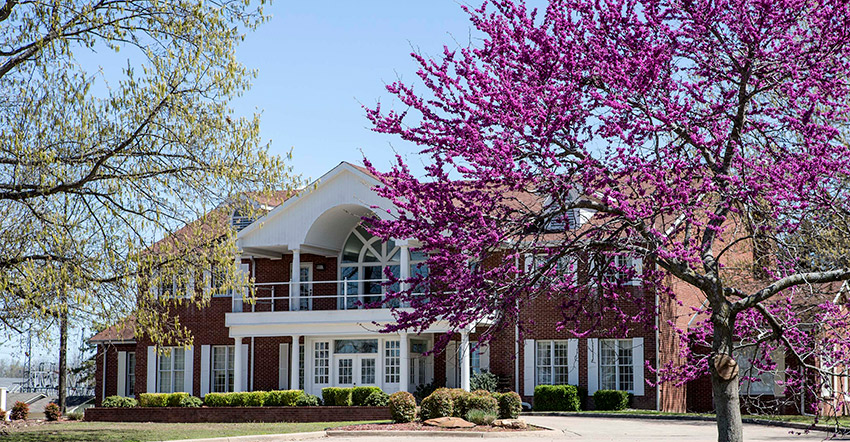 The NSU Foundation relocated to its current location, the Branscum Alumni Center, in 1998. The center is also currently home to the NSU Alumni Association.

(Tahlequah, Oklahoma) — When Northeastern State University alumnus and veteran board member Bill Langley was invited to join the NSU Foundation he recalled it being an easy decision.

Langley was enrolled at NSU from 1966 to 1969. Being able to attend NSU meant a lot to him because it allowed him to be closer to his mom and dad, the latter of which at the time was experiencing health problems.

After graduating, Langley said his appreciation for the university and the education he received from there only grew and as he began to enjoy some success knew it was time to pay it forward. Langley is currently the owner of Langley Development LLC. He added he uses his membership on the foundation as a way to help others and the institution at the same time.

NSU President Steve Turner addresses the crowd gathered in the NSU Herb Rozell Ballroom on July 24 to celebrate the 50th anniversary of the NSU Foundation.
Starting with only $1 in its endowment the NSU Foundation was founded on July 27, 1971 with the mission to advance the work at NSU and provide support to its students, staff and faculty. According to the inaugural foundation annual report published in 1996, the foundation was designed “to make dreams come true.”

Today, the foundation’s total assets have grown to nearly $44 million and foundation members remain committed to the principles the foundation was established upon five decades ago. Past members and supporters marked the 50th anniversary of the Northeastern State University Foundation on July 24.

“The ultimate goal would be for the foundation endowment to grow large enough that financial need would never prohibit any student from becoming part of the RiverHawk family,” Chrissi Ross Nimmo, chairman of the NSU Foundation Board of Trustees, said. “NSU is a special place for thousands of alumni, I hope that some of those who are able can give back so that current and future students can have those same fond memories.”

Nimmo is currently Deputy Attorney General for the Cherokee Nation.

Helping students achieve academic success was a core principle of the foundation’s founding and remains at the center of its activities today.

An early byproduct of the foundation’s establishment was the creation of the President’s Leadership Class program at NSU, which was created three years after the foundation’s establishment. Among the many recipients of the prestigious scholarship was Dr. Jim Gore, NSU alumnus, former foundation vice chairman (2006-2007) and chairman (2008-2009) and current chair of the investment committee. Gore is a Pryor dentist, and he met his wife Rebecca, a Mayes County associate district judge and former PLC student, while at NSU.

As a PLC student from 1987 to 1991, Gore said he had the opportunity to sit in on some Northeastern State University Foundation board meetings.

He added he was inspired by the foresight of the foundation board as they worked on how best to support future generations of NSU students like himself.

But the President’s Leadership Class is but one example of the ways the foundation has been able to make students dreams of higher education a reality. The foundation’s efforts have led to the creation of other scholarships supporting NSU students.

Most recently, the foundation wrapped up the Preserve our past. ENSUre Our Future. campaign which raised $27,085,130, exceeding the original goal of around $25 million and significantly more than the three previous campaigns combined.

Of the millions raised, a little more than $10.9 million would go towards scholarships, with more than $6 million being used to establish new accounts to help future NSU students. Campaign funds will also support other NSU projects such as the restoration of Seminary Hall and Wilson Hall and professional development for NSU employees.

“The pat on the back a scholarship gives a student can renew hope to overcome one more obstacle to earn that degree and open a myriad of possibilities for the rest of her life,” Jim Howard, NSU Foundation board member and former NSU vice president, said. “The power of giving is limitless. Believe and act.”

Foundation board member Wellon Poe, who was a PLC student from 1980 to 1984 and is now an attorney in Oklahoma City, is also another example of how a scholarship from the foundation can transform lives. He said it provided him the opportunity to go to college and help set him on the path he is on today. He added serving on the foundation board has been a way for him to not only pay it back but also pay it forward.